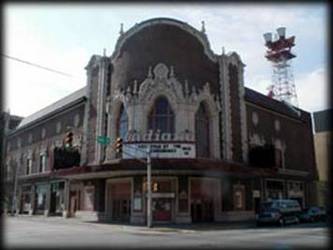 Instrument History
Wurlitzer Opus 1871; a 3 manual, 11 rank instrument shipped from the Wurlitzer factory in New York on April 20, 1928 destined for the El Capitan Theatre in San Francisco.  Theatre and organ debuted to the public on June 29, 1928, with both entertaining audiences until December, 1957 when the theatre was permanently closed.  Nearly all of the El Capitan was demolished in 1964. Only the facade currently remains, serving as an entrance to a parking lot on the site of the auditorium.

Opus 1871, thankfully, was rescued before the wrecking ball arrived at the El Capitan.  In 1960 the organ was removed by Bill Reed.  Mr. Reed planned to install the instrument in his Antioch, CA, residence; however, the project never reached completion.   The Reed family donated the organ to the NorCal chapter of the American Theatre Organ Society for restoration and installation in the Fox-California Theatre in Salinas, CA.  Unfortunately, only one concert was ever presented at the theatre, with Jonas Nordwall playing a chapter concert for both NorCal and the Golden State chapters of ATOS.

The future of the Fox-California Theatre became uncertain in 2004, and in an effort to secure the future of Opus 1871, the NORCAL chapter decided to donate the historic instrument to the Central Indiana Chapter of the American Theatre Organ Society (CIC-ATOS).  In August, 2005 a group of dedicated CIC-ATOS members traveled to Salinas for a four-day long task of disassembling and carefully packing the Wurlitzer for a 2300-mile tractor-trailer journey to Indianapolis.

CIC-ATOS is planning to install Opus 1871 in the John Eberson-designed Indiana Theatre in downtown Terre Haute, IN.  Restoration is in progress, with the console and chestwork nearing completion, and the regulators, tremulants, blower, piano, and swell shades are already completed.

Acknowledgement:  Sincere appreciation to Mr. Tom Delay of Salinas, CA for helping with details of the history for Wurlitzer Opus 1871


How You Can Help

Acquiring Wurlitzer Opus 1871 has taken many hours of volunteer time by CIC-ATOS, and many more hours will be necessary for installation of the instrument.  However, not all of the acquisition efforts or requirements to achieve an installation meeting the standards and mission of CIC-ATOS can be accomplished via volunteers alone.  Completion of the project will require in excess of $90,000.  Your tax deductible contribution will help make the return of an integral part of the historic Indiana Theatre possible.*   Please use the donation form available for download by clicking here.  Also, you can use the form to be added to the mailing list regarding future concerts and events featuring the Indiana Theatre Mighty Wurlitzer.*CIC-ATOS, Inc. is a designated not-for-profit corporation under section 501(c)(3) of the Internal Revenue Code.  Contributions to the organization are tax-deductible to the fullest extent allowed by law.